Canada’s consumer reference standard for fenestration just got the biggest overhaul ever. Instead of subdividing the country into multiple climate zones, a single standard now applies nationally. Plus, the bar for energy efficiency in windows and doors has been raised higher than before.

If you’ve ever read about replacement windows and doors, you have heard about Energy Star®, Climate Zones, as well as about some metrics used for the performance of a fenestration product. Here is what you need to know about Energy Star®, the new standards in effect as of January 2020, as well as how it affects you as a homeowner.

What is ENERGY STAR® for windows and doors?

ENERGY STAR® is a certification label for high-efficiency products. These products allow for 20% or more energy savings when compared to products built to building code standards. Natural Resources Canada (NRCan) administers and promotes use of the ENERGY STAR® brand in Canada under an agreement with the U.S. Environmental Protection Agency (EPA). ENERGY STAR® Canada is a voluntary partnership between the Government of Canada and the industry to make high efficiency products available and easily visible to Canadian consumers.

When developing new products, window and door manufacturers send their drawings to third-party labs, where computer simulations are performed to assess potential performance. Prototypes of products ready for production are sent for live testing for mechanical strength, air- and water-tightness, ease of operation, insulation, visible transmittance, noise reduction, resistance to temperature extremes or to forced entry. The independent labs then send the reports for publishing in certified product databases, such as the NRCan’s searchable product database for windows. ENERGY STAR® certified windows and doors must meet specific qualifying criteria for this designation. A very small number of products meet or exceed an even higher energy efficiency benchmark. These are awarded the ENERGY STAR® Most Efficient designation – the highest official energy efficiency rating in Canada.

What does ENERGY STAR® assess in windows and doors?

There are several metrics that are used when determining whether windows or doors adhere to ENERGY STAR® requirements.

Why have Climate Zones?

Being the second largest country in the world, Canada has a territory encompassing very different climates. There is virtually no winter in some Pacific rainforest areas in British Columbia, while the vast Canadian Arctic has been in permafrost for millions of years. There are extreme seasonal temperature variations in the dry continental climate of the Prairies, while the Atlantic provinces take frequent beatings from violent storms, with heavy rains or snowfall. To help set standards for each geography, the USA and Canada were subdivided into reference areas called Climate Zones, depending on temperature and moisture conditions in each. For each climate zone, fenestration products had to meet specific minimum criteria to qualify for the ENERGY STAR® rating.

What were these Climate Zones in Canada?

Until 2015, there were four Climate Zones in Canada – A, B, C, D – with A being the warmest, and D the coldest. In 2015, these were reduced to three – with Climate Zone 1 being the mildest (south of Vancouver Island), Zone 2 covering most of the densely populated part of Canada, and Climate Zone 3 covering the cold and sparsely populated North. Depending on where you lived, if you sought energy efficient windows and doors, you would choose products rated for your specific climate zone – or for a colder one. For instance, a window rated for Zone A or 1 was only good in a small area in Southwest BC, while a window rated for Zone D or 3 was good for a home anywhere in Canada.

Unfortunately, this system caused confusion among some homeowners. Many did not know that, apart from looking for ENERGY STAR® certified products, they also had to make sure these were certified for the specific climate zone the building was located in. Many window dealers sold windows and doors that were ENERGY STAR® certified – but for a much warmer climate than where they were to be installed. It was misleading to homeowners who thought they were getting energy efficient windows and doors, but ended up with inadequate products in their homes. As a result, there have been calls - from consumer groups as well as from the industry - to make the ENERGY STAR® ratings simpler and to help homeowners choose properly energy-efficient windows and doors.

As of January 2020, you no longer have to reference a Climate zone in determining whether a window is ENERGY STAR® certified for your area. There is now but one single standard that applies to all of Canada, from coast to coast to coast, so a product is ENERGY STAR® certified in Canada – or it isn’t. This change will make it easier for Canadians to choose energy-efficient windows and doors for their homes. These products will help save more energy since they are rated for the coldest areas of the country. The new standard did bring some meaningful change: only 17% of the windows that were listed as ENERGY STAR® rated in 2019 are energy efficient enough to qualify for the 2020 rating. While the product selection is reduced, It also means that choosing ENERGY STAR® rated windows and doors are better than before. While better products can cost more upfront, they should also bring more savings on energy bills down the road.

Here is an overview of how the ENERGY STAR® climate zones have changed over the last years: 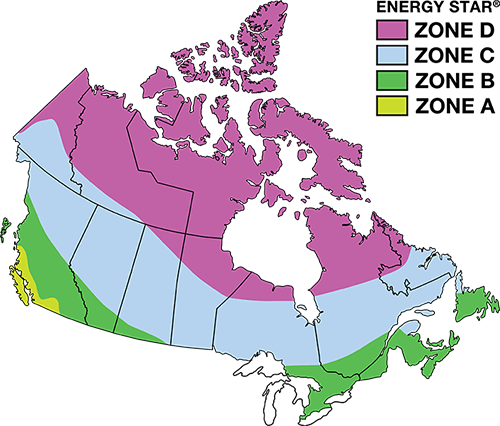 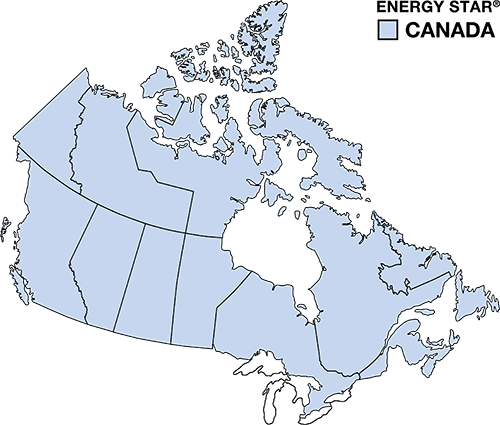 The new ENERGY STAR® Canada standard applies nationally as of 2020.

What are the new ENERGY STAR® fenestration requirements for Canada, in numbers?

As in the previous version, a fenestration product in Canada can qualify for the ENERGY STAR® rating using either the U-factor alone (provided some maximum air leak rates are met) or the more comprehensive Energy Rating (ER Value). The previous requirement for the coldest Climate zone now applies nationally. To be ENERGY STAR® rated in Canada, windows must either have an Energy Rating of ER 34 or more, or a U-factor of 0.21 (imperial) or less. The ENERGY STAR® Most Efficient denomination, which applies to but a small number of products that lead the charts in energy efficiency, has gotten a bigger overhaul: the ER value was raised from 36 to 40. See below to compare how the ENERGY STAR® Standard has changed:

Are our Windows ENERGY STAR® certified in 2020?

We launched our RevoCell® windows in 2017 after many years of development, bringing high-end performance to the mid-market price range. With a basic dual-pane, argon-filled, insulated glass unit featuring a single low-e coating and a warm-edge spacer, this microcellular PVC window attained an Energy Rating of 38 and was awarded the ENERGY STAR® Most Efficient designation. It outperforms most triple-pane windows on the Canadian market in terms of energy efficiency, while being stronger and brighter. It was only natural that it became our best-selling product. For 2020, to further improve its energy efficiency, we stocked it with clearer glass and a better low-e coating. Our standard dual-pane RevoCell window now qualifies for the new ENERGY STAR® 2020 Most Efficient designation. It is the most energy-efficient operable dual-pane window in a price range that’s affordable to the average Canadian homeowner. But we did not stop there: our customers asked for a triple-pane RevoCell, so we listened and launched that as well. With a U-value of 0.15 and an ER value of 48 in standard configuration, the triple-pane RevoCell window is not just ENERGY STAR® 2020 Most Efficient — it is in a class of its own! When you choose Verdun Windows for your home upgrades, know that you’ll get products that top national charts in energy savings, while being affordable.

Request a free in-home consultation to learn more about our Energy Star certified windows and doors, and get a quote on your project. No pressure, no obligation, free.

Your information is secure. We won’t spam you.

Your information is confidential and secure. We will not share it with third parties.